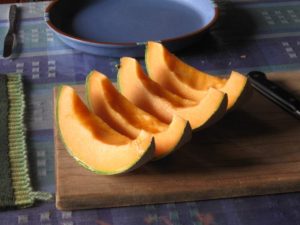 During melon season, these crescents of beauty often greet me in the morning. My husband is an early riser and a carpenter to boot. Luckily for me, he has a sense of harmony and order not confined to his building activities; the way he overlaps the gently orange slices of cantaloupe to visually echo each other just makes me happy.

There’s something about repetition and regularity we humans like. It’s comforting. I’ve heard it said that we women, especially,   need to repeat patterns in our quilts and our knitting. Having bodies that contain the scary, exhilarating potential of starting new life in a moment, without the possibility of escaping the long-term consequences, we are aware in ways that men are not of the  physical risks inherent in propagating the species. Any woman who has faced the proposition of giving birth can attest to the terror she feels at one time or another during gestation. One way or another, a whole other person is going to have to emerge from her!  The patterns we create with our own hands are something we can control, when there is so much both inside and outside of ourselves that we cannot.

When I look at the round pregnant shapes of tomato after tomato on the kitchen windowsill, it’s easy to think of them as a red  rosary, a parade of prayers against the complications and deviations of pregnancy and childbirth still possible even in this modern age. That image of the expectant mother placidly knitting? It’s only half of the story. Knitting can help us wait and anticipate, yes.  But the repetitive making of each stitch is also a form of physical/emotional therapy, helping to calm a woman’s very understandable fears of what lies ahead. 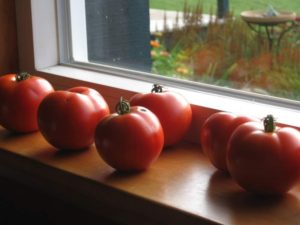 Just as repetition of pattern can reassure, so it can deepen our sense that life is precious and tenuous. In the movie “The Hollars” a son shaves his mother’s head before brain surgery. And she allows it.  While watching this film recently the tenderness of this tableau brought me to tears. This rarely happens to me anymore, as I’m a tough old bird of 67. But the scene took me right back to my older sister’s bout with cancer and chemo several years ago, when she asked me to shave her head for her. I was touched and awed by the trust she put in me to perform such an intimate service.  She is tiny, and looked like the sweetest little Buddha afterwards. Thank heavens she is still around, and healthy.

More of a shock was a déjà vu scenario in mystery writer Nevada Barr’s novel “Blind Descent.”  In the story a woman’s trachea is crushed in a fatal fall. It was the exactly this injury that killed my first husband when his ultralight stalled on its maiden voyage and he plummeted and crashed. Reading about it again reminded me of that awful  accident which left my teenage son and daughter without their father.

For weeks afterwards I took myself through what his final moments must have been like as he struggled to breathe. There was no earthly use for this replay on my part, except for a magical belief that if I imagined it enough times in my own mind he would not have endured it by himself. I now believe it was a necessary step in the grieving process. And I no longer subject myself to that compulsive replay, proof of some sort that I have accepted and moved past that family earthquake.

For whatever reasons we need visual, physical or emotional patterns, they seem to help us endure this most temporary business of being human. 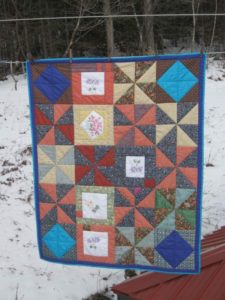