I’m not fit to spend time with grown-ups.  For the past few weeks I’ve been spending at least an hour a day washing rocks. By hand. In a smallish blue plastic bucket.

It began when I realized that the bark mulch I’d laid down so carefully over landscape cloth between my garden beds was sprouting plants.  That’s because mulch, which is tree parts, sooner or later breaks down into yummy compost, which is very like soil.  A seed loves soil; the hard little capsule can work its way in between the bits, where it’s cradled and moistened until it’s safe to sprout. There it gets breakfast, lunch, dinner and drinks, and soon you have a baby plant. Then a big one, in your garden path where you don’t want it.

It’s all about density, I’ve decided.  When George McFly approaches his heartthrob in the movie “Back to the Future,” and blurts out “I am your density!” he thought he was messing up the word “destiny.”  But he was right on the money.

If you don’t have the same emotional /mental density as another person, you’re just not going resonate at the same frequency, and it’s not going to be easy for you to get along all that well. You’re not going to laugh at the same jokes, cry at the same movies, be thrilled by the same things.

Physically, though, if a substance is less dense than we are, more yielding, it’s going to make us feel good.  Soft fibers like the ones I work with–wool, cotton, and even the best acrylics, conform to our contours, reassure us.  We can relax into their fluff and warmth. Conversely, we wouldn’t dream of dressing ourselves in anything harder or denser than our own yielding flesh. The idea of wearing a garment from wood or rocks is laughable, except maybe for Halloween, or some Goddess-directed ceremony.

Like us soft humans, seeds just don’t flourish on rocks. The oldest wisdom tells us: the seed fallen on rocky ground soon peters out. Even the most flourishing rock garden in the desert depends on little pockets of soil to support its greenery. 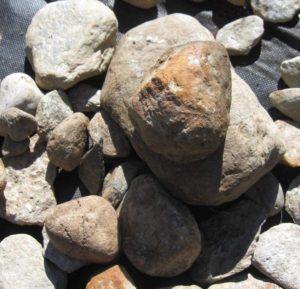 So to keep weeds off my garden paths, I’ve been banishing the mulch from the paths.  I’m tipping it off into my flower beds and starting over with rocks.  It’s slow, elemental work, a little like knitting. Each rock that emerges when I dig a new bed needs to be washed of that pesky soil in a water-filled bucket, then laid onto landscape cloth.  It looks pretty silly at first.  But once the cloth is covered it starts to look rather intentional and inviting.

I know a machine could do this faster.  But having each rock in my hand makes time slow down for me. I become less focused on the outcome, more on the rock.  Some look like potatoes, whole or broken, some like eggs. Some are flat, some oval.  And some have striking color combinations. Rusty iron stripes on a gray stone remind me of the burnt orange wool I have upstairs, dyed with onion skins last year,  and the silvery skeins dyed with purple loosestrife and iron, waiting to be knitted into a shawl or sweater. Deep orange and grey: what could be better? 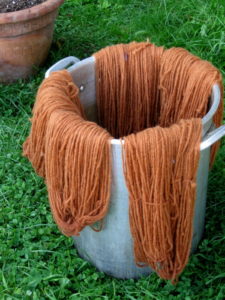